Yasmin Alibhai-Brown: Religions should not be allowed to make ghettos – The Independent 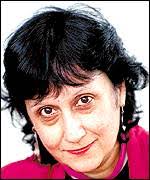 No love lost between Yasmin and Cristina. I know whose side I’m on.

I cannot stand Cristina Odone, and the feeling is mutual. We haven’t spoken for years, since the week when, as deputy editor of the New Statesman, she commissioned a hatchet profile on me by a female journalist (of course), who had met me once on a radio show. Even I, well used to abrasive attacks, was knocked back by the virulence in a left-wing magazine I had previously worked for. Time has not healed that bruise, and never will.

This site uses Akismet to reduce spam. Learn how your comment data is processed.

Suffolk Humanists hold regular talks and social gatherings. These are  at the Thomas Wolsely pub every 2nd Tuesday of the month (at 7.30) and at the Duke of York in Woodbridge on the last Saturday of the month (12.00 noon).

Find out more about our group including how to join