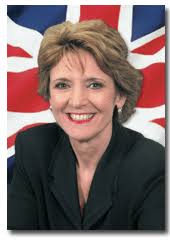 “We the undersigned petition the Prime Minister to reprimand MP Iris Robinson on her recent comments about Homosexuality.”

“MP for Strangford has recently suggested that all homosexuals should receive psychiatric treatment to help ‘cure’ them. These comments are not fitting of a MLA let alone an MP. They show narrow minded views and the belief that in Northern Ireland that bigotry is acceptable.”

Their response won’t make any difference to that bigotted and prejudiced old bat, Mrs Robinson. She’s clearly not worried about attracting the gay vote.

This site uses Akismet to reduce spam. Learn how your comment data is processed.

Suffolk Humanists hold regular talks and social gatherings. These are  at the Thomas Wolsely pub every 2nd Tuesday of the month (at 7.30) and at the Duke of York in Woodbridge on the last Saturday of the month (12.00 noon).

Find out more about our group including how to join